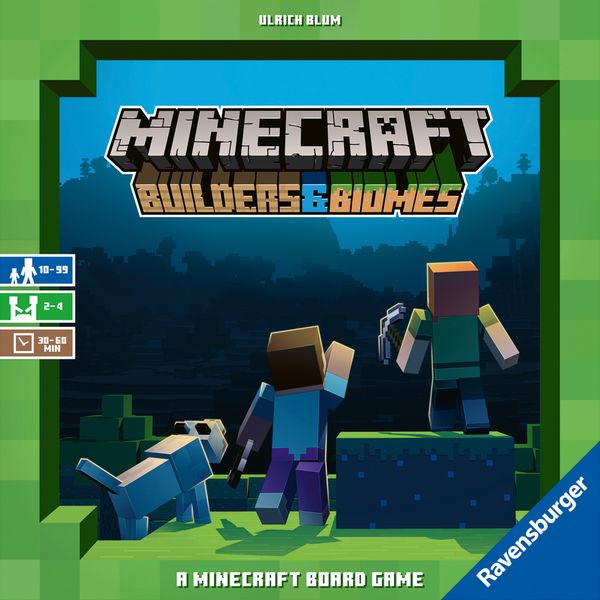 Ravensburger has announced that a Minecraft board game is going to be released sometime in 2019. A of now, no details of mechanics or the like is avaible, what the publisher has announced is this:

The video game phenomenon Minecraft comes to your table as a board game experience filled with epic adventures! More info coming soon.

Well, not a lot to go on, but rest assured that when any details emerge, you can read about it here.
Until then, feel free to post your speculations below.

So, the game is apparently coming out very soon, the 1st of October i Europe, and the 15th of October in the US and the rest of the world.

The game will be designed by Prospero Hall studio which has released a lot of titles lately, like Jaws and Villainous, so there is a legit gaming studio behind this and hopefully not just another cash-grab on a well-known franchise.

The game will not be called Minecraft the Board Game like previously announced, it has changed to Minecraft Builders and Biomes - a Minecraft Board Game.

Here is the description of the game from the publisher:

As in the original Minecraft digital game, in Minecraft: Builders & Biomes players explore the Overworld, build structures, and mine resources, earning points for structures and the largest connected biomes of forest, desert, mountain, or snowy tundra spaces on their player boards.

Familiar foes like Endermen, Creepers, and other mobs also appear throughout the game, and they need to be defeated using weapons collected from the board. Defeating mobs earn players points in addition to granting additional awards. Game scoring occurs as the resource cube's layers are depleted. As soon as the third layer runs out, the adventure comes to an end, and the builder with the most points wins.

In more detail, on a turn you take two different actions from the following possibilities:

Scoring takes place three times during the game, specifically after the final block is removed from the first, second, and third level of the building block cube. In the first round, you choose one of the four biomes (forest, desert, mountains, or snowy tundra) and score for the largest connected area of this biome on your personal building board. The board comes pre-printed with biome spaces, and as you place buildings on this board, you can alter the biome of a space. In the second round, you choose one of three materials (wood, sand, stone, or obsidian) and score for the largest connected group of structures on your personal building board that are made of this material. In the third round, you score for the largest contiguous group of structures (decoration, dwelling, animal house, or bridge) of your choice on your board. After scoring in the third round, tally bonus points from the mobs you've collected.

Sounds clear? If not, read the rulebook right here.

Here's an idea, pick the game up at Amazon and at the same time help this site! Cheers!
Also, drop a comment below to let the world know what you think of this; Yay, or NAY!