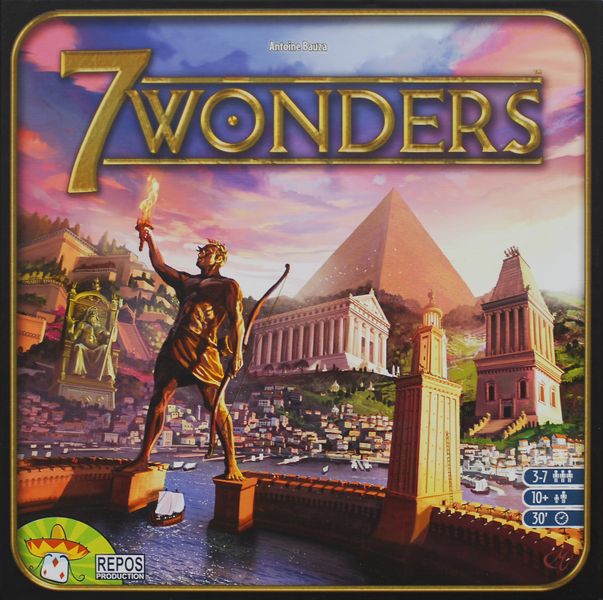 7 Wonders is a great game and it's even better with a couple of expansions. The question is, which expansions are worth getting? Which one should you start out with?
How about complexity? I like the base game because it's so accessible!

Right, we will have these questions in mind, we will list the current expansions for the 1st edition of the game, and help you get the best expansion for your needs. We will list these in the order they came out.

This expansion adds an extra element to the game, leaders. Each player starts the game with 4 leader cards in their hand in addition to the normal cards. Of these, they must pick one and pass the remaining cards to the players to their right. They will continue this way until each player has drafted 4 leaders each. Then the game will begin as normal, but with another step at the beginning of each age, and this is where the players have a chance to play one of the leader cards in their hand. Leaders normally cost money to recruit. You may also use a leader card to build on your Wonder, or you may discard it for 3 gold. Also, each player now starts with 6 gold instead of the normal 3.

As you might have guessed, the different leaders provide different bonuses, a couple of examples: Alexander the Great gives you one extra VP per victory token you have. Ceasar gives you 2 Military Shields. Ramses lets you build the Guild cards for free.

Pros: Adds variety, more combinations and synergies, while not adding too much playtime or too much complexity. With that said;
Cons: Learning the new Iconography can be daunting, and the game DOES get more complex, so not recommended for totally new players. Also, there will be combinations out there, if unchecked by the other players, can give a player A LOT of points.

All in all a solid addition to the game, but not an essential one.

This expansion is avaible for both 1st and 2nd edition. Make sure you buy the right one.

This expansion came out 2012 and adds a new type of card, 2 new wonders, 3 new guilds cards, and 6 new leader cards (see Leaders above). It also adds support for an 8th player, and there are rules included for team games.

The main thing is the new cards, which are black and have a heavy focus on money and player interaction. These cards let you make other players lose money, you can spy on them and copy their technologies (as in green cards), they will let you recruit powerful mercenary armies for gold, smuggle your opponent's resources to yourself for a small fee.
There is even the possibility to build embassies that remove you from the military conflict that age. As you can gather, there is a lot of new stuff here, all of which are pretty great and makes 7 wonders a lot better. The 2 new Wonders, Petra, and Byzantium, are nice additions that have some of the mechanics above on them and are not compatible to play without the new black cards.

Pros: More interaction and more variety without adding a lot of playtime and complexity.

Cons: There are some extra Iconography and rules to learn, but less so than the leader's expansion. Some players might dislike the added layer of interaction and cut-throat mechanics.

This is the best expansion to 7 Wonders, it makes the game a lot better.

Again, make sure you buy the right edition.

This expansion is very straight forward. It just contains 4 new wonders and a rule sheet for these, and without further due, here they are:

A solid addition to the game, I mean, more Wonders, what's there not to like? Just be mindful that you will need Leaders and Cities to make the most of this expansion. 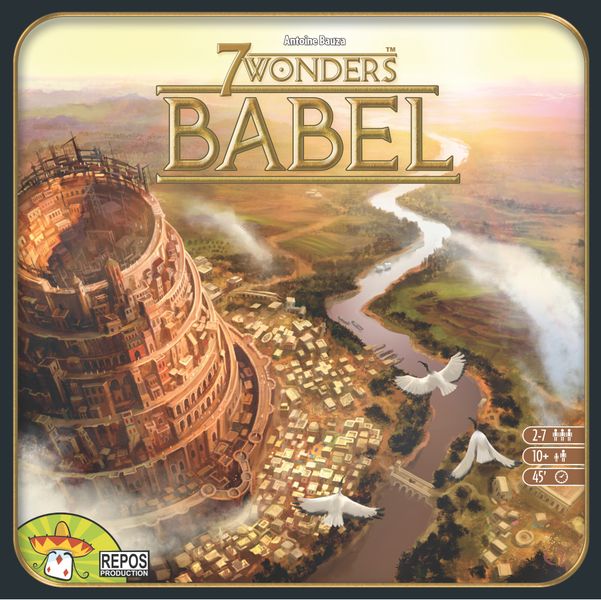 7 Wonders: Babel is essentially two expansions in one; The Tower of Babel and the Great Projects.

In the Tower of Babel part, players will draft tiles for building the tower of Babel. You will place these and add to the construction of the Great Tower by discarding a normal card to add one of your tiles to the tower. Each and every one of these parts will add new rules to the game that everyone must follow. Examples; One tile makes buying resources from your neighbors cheaper, another lets everyone construct military buildings for free, another lets you gain 5 gold each time you build a Guild card, etc. These rules are in play until someone builds another tile on top of it.

The other part, the Great projects lets players participate in the building of great structures. One of these is randomly chosen at each age, and players can choose to participate in the building of these by paying extra coins when playing cards of a specific color. When they do they remove a token from the project cards, and if all tokens are removed the project is considered built.
If a project is built, each player who contributed gets a reward, and if the project fails, everyone who did not contribute gets a penalty.
The rewards get you things like being able to build a card for free, military Shields, money, technology, and so on. Penalties often make you discard a card of a certain color, or lose all your money, or even lose Military victory tokens.

Pros: The fact that this is two expansions in one, which makes it flexible. The Great project module is a very fun addition to the game, which adds interaction and more options while not changing the playtime or complexity, at all.

Cons: The tower module changes the game too much and makes it very hard to plan ahead knowing that a rule change is around the corner. The two of these also take up a lot of space so there will be an issue storing it inside the base game box if you have more expansions. The most expensive expansion to 7 Wonders. It also adds fiddliness to the game in form of a lot of tokens.

Get it now, it's for sale at Amazon for about 20 bucks. 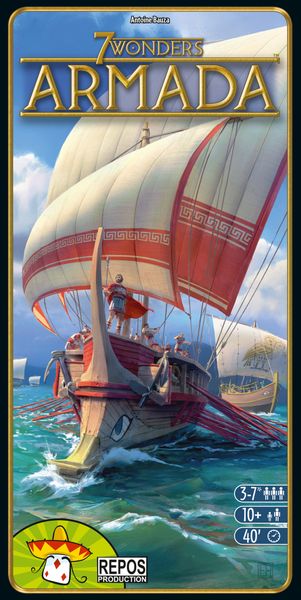 The latest addition to the game adds naval combat and exploration to the game. Each time you build a certain color of card you can pay an extra cost to move a boat up a "naval" track to reap benefits of different kinds. These benefits are tied to the type of track in question.

Example: The red military cards let you move your red boat along the track and collect Naval warfare power, which you will use in an extra combat phase which lets you combat ALL other players. Moving along the green track will let you explore islands and reap the rewards you find there, be it resources, gold, or VP. The blue track is straightforward, it just gives you more VPs and the yellow track will give you more gold and also lets you tax the other players to lose gold.

There are also some new cards that lets you attack certain players rather than just going to war with your neighbors. Players will get one extra card each per age.
For more information see our 7 Wonders: Armada review. Definitely one of the most complex 7 wonders expansions.

Make sure you pick up the right edition 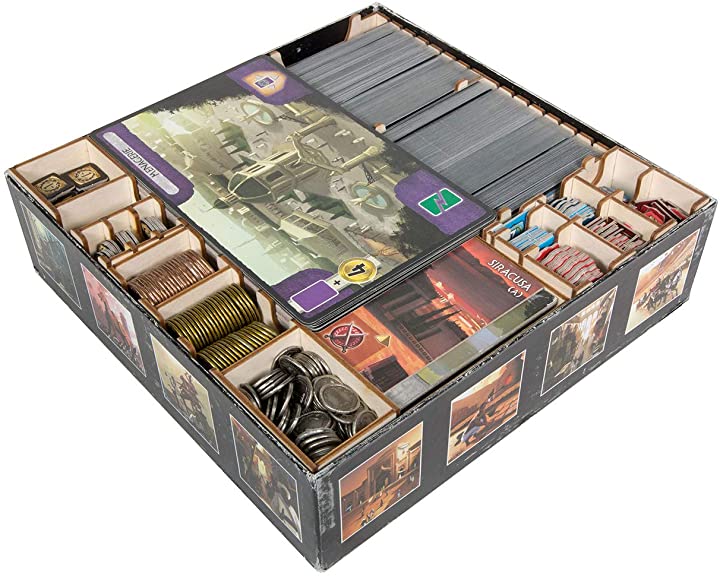 Right, so you've decided to get all of the expansions, and now you have a couple of different boxes to carry around, or worse, you have just ditched the inserts and everything is stored inside the box in an organized chaos using ziplocks and perhaps some cardboard.

You try to tell yourself this is fine, but let's face it; It's not.
What if I told you there is a storage solution that makes your box take all the expansions, including armada and babel, which is both beautiful and affordable?
You would get intrigued. Very intrigued. Check this out:

Note that this requires assembly and some glue. But you are a competent person, and you like this kind of stuff, right? Broken tokens has done a lot of inserts like this one, and they are good. You simply can't go wrong. Just 35$, totally worth it.

Note that this storage solution is made for the 1st edition of the game.