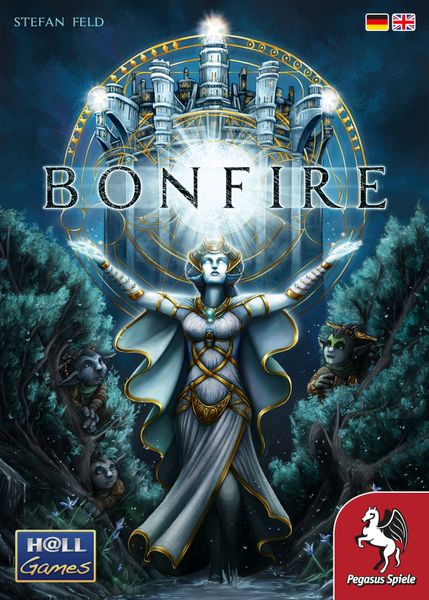 The legendary German designer Stefan Feld have a new game in the pipe, Bonfire, which is a engine-builder kind of game that involves a board, cards, meeples, chits etc, pretty much everything you would expect from a Feld design.

The theme of the game is explained like so:

You are a group of gnomes living close to the cities and you also need and the light of the bonfires. Missing it now, you try yourself to visit the cities and learn how to ignite the bonfires once again: You must visit the guardians of light on their holy islands and ask for tasks to prove your good will. For each completed task, they will re-ignite one extinguished bonfire. Whoever manages to earn the greatest trust from the guardians and manages to brighten their city the most will win the game.

The general goal is to compete with the other players competing tasks for the guardians of different difficulty leves which will of course yeld more points for the more difficult tasks and less so for the easier ones. The only problem is, all players have access to the same tasks, and only the one that completes them first can reap the rewards.

To achieve this you will complete different actions which you will get from action tiles, which in turn is gained by placing fate tiles into your privare board in a clever way. You will also spend actions to move guardians, complete tasks, ingite bonfires etc. A lot of stuff going on in this game, and I suspect this will be a great brain-burner.

There is way too much going on in this game to cover here, so if you are interested in more information about this, read the bonfire rule book here.

The game is released in Germany, US wil have to wait..