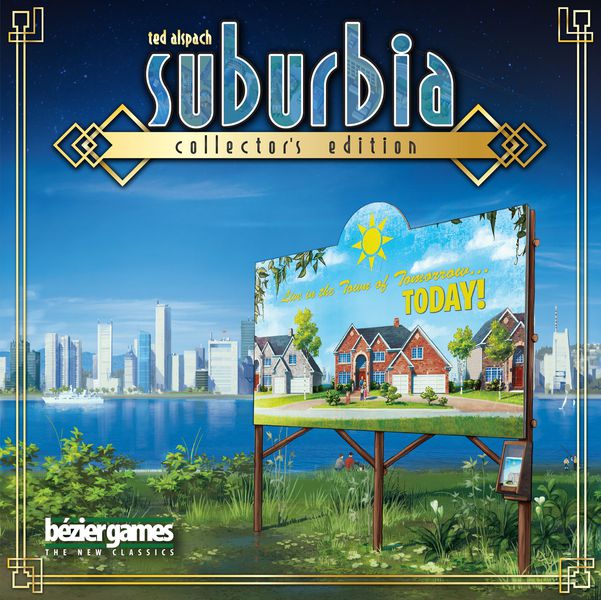 Bézier Games has announced a Collector's Edition of their city building game, Suburbia.

This version of the game will include the two Suburbia expansions Suburbia Inc and Suburbia 5*, and the two mini expansions "Essen SPIEL" and "Con Tiles", and a new expansion aswell, "Nightlife" which like the name suggests, will focus on locations are that are more active in the evening hours.

The game has been redesigned with 3D artwork, which will be printed on much larger tiles than the regular version.

Suburbia: Collector's Edition will be released October 2019 and will be priced around $100 in retail, and Bézier Games will also launch a Kickstarter campaign. The game is designed by Ted Alspach.

Suburbia Collector’s Edition is a revamped version of the classic game Suburbia by Bezier Games. Suburbia fans old and new will fall in love with the updated three dimensional artwork, city-specific recessed borough boards, oversized tiles, and giant tile tower. This beautiful collectors edition features several amazing Game Trayz organizers and includes all existing expansions as well as a brand new one: Nightlife, which has buildings and locations that are more active in the evening hours.

This strategic tile-laying game has players use hex-shaped building tiles to create their own unique city. These tiles include residential, commercial, civic, and industrial areas, as well as special points of interest that provide benefits and take advantage of the resources of nearby places. Your goal is to have your city thrive and end up with the greatest population.

Each player builds up their own economic engine and infrastructure that will be initially self-sufficient, and eventually become both profitable and increase your population. As your city grows, you'll increase both your income (giving you more cash to spend) and your reputation (growing your population). The winner is the player with the largest population.

During each game, players compete for unique goals that offer additional population boosts - and with the many varying buildings and properties, you’ll never play the same game twice!