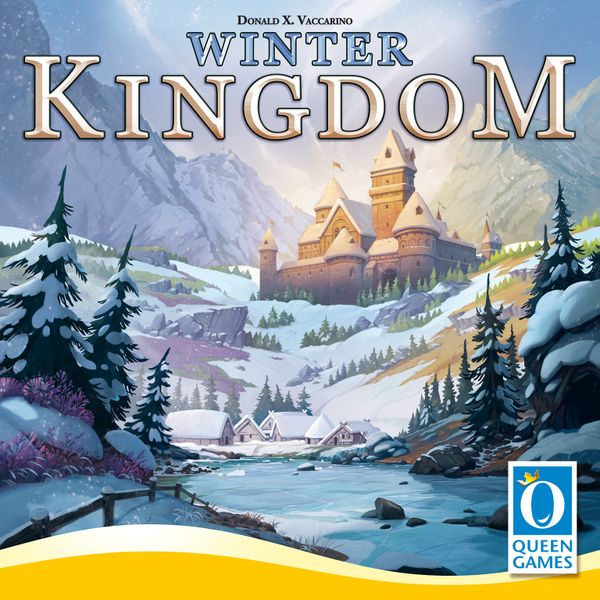 Donald X. Vaccarino, you know, the Dominion guy, has also made an excellent game called Kingdom Builder, a rather themeless affair where you lay down settlements on different regions on a modular map for points. The theme is the only thing lacking in the game though. Now it's time for a sequel, Winter Kingdom. Let's have a look.

Winter Kingdom features seven, double-sided hexagonal map tiles that are randomly arranged into the playing area. After that, three scoring conditions, one economy card (showing how players earn money), and one twist card are dealt, giving the unique features of the game. Each player is dealt five ability cards and one terrain card.

On your turn, you must place three houses in the terrain depicted on your terrain card. If possible, you must place the houses next to previously placed houses. (If not possible, they may be placed anywhere that matches the terrain on the card.) You also start the game with a limited number of forts, which can replace any house and which count as two pieces.

After placing houses, you may use your gold to make one purchase, either paying the cost to put one ability card into play or paying an additional cost on a previously placed ability to upgrade it. Once purchased, the ability may be used once per turn for the rest of the game. You start the game with a little gold to buy abilities and can earn more gold based on the economy card in play for that game.

The game ends once one player is out of both houses and forts. Players score based on the criteria of the scoring cards for that game; in addition, whoever has the most houses next to each castle scores 3 additional points. The player with the most points wins.

As you have probably gathered, the gameplay is like Kingdom Builder but with extra stuff:

First off, you will start with 4 forts on top of the 32 houses, which are worth 2 houses, which in itself opens up for a lot of strategic and tactical choices.

Secondly, money is introduced, which you will use to buy special abilities rather than just getting them when building close to a point in the map like in Kingdom Builder.

There are now 6 types of terrain instead of just 5.

Finally, if players would like to switch up the rules they play, even more, they can choose one of the eight twist cards. These cards change the rules of the game, making different ways to score possible.

All in all, this sounds very cool, but if buying this is warranted if you have Kingdom Builder + a ton of expansions is debatable. However, if you don't own Kingdom Builder you should check this one out. Anyway, the Kickstarter is live and can be accessed here.

By the way, if you are a fan of Dominion, you should check out our article covering the latest expansion, Dominion: Menagerie.