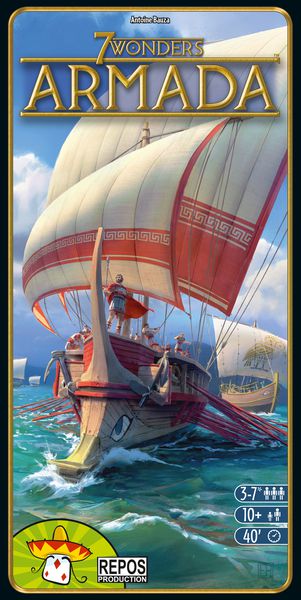 This 7 Wonders expansion allows you to build fleets of ships to conquer the seas. New Armada and Island cards enrich the game and increase the interaction between players.

The flow of the game is slightly changed, but the victory conditions remain identical to those of the base game of 7 Wonders.

At the beginning of each Age, the players each get a hand of 8 cards. They will play an extra card during each Age. At any time a Red, Yellow, Green, or Blue card is played, the player will be able to move the ship of the same color one space, and access to various advantages, such as discovering islands, military power, victory points, etc. There's an extra cost you need to pay to do this, and can be either resources or coins.

The set up remains pretty much the same, you add the same amount armada card to each age as there are players, in the same way the black cards are added in Cities.

The islands are shuffled according to their age and put in 3 face-down decks.

Give all players a fleet board, which is to be placed next to the wonder, and each player receives ships of each color; Red, Yellow, Green, and Blue.

There are some slight changes to the rules and some changes to some of the game semantics:

This is the biggest gameplay changer, but it's pretty straight forward.

A player who has played a Red, Yellow, Blue, or Green card will have the option to pay an additional cost in order to move the ship of the same color one space on the fleet board, which will grant the player benefits of different types (Red for military, blue for more VPs, yellow for money, green for islands).

The islands are discovered with the Green tack on the fleet board and give you access to private resources, Ground Shields, Naval Shields, and other good stuff. You'll get to choose one of 4 different islands.

After each age, you will resolve ground combat just like before, but there will also be Naval combat, where everyone participates. It pretty much works like this; Everyone compares their naval strengths, and the winner gets X amount of VP, and the runner up gets a bit less. In bigger player counts even the third place gets a couple of points. Of course, this scales with the ages, much like ground combat. However, the one with the LEAST Naval strength gets a lot of negative VP points, so skipping Naval Power altogether might not be a good idea.

This expansion also lets you do ground combat against non-neighboring civilizations on 4+ player games, with special cards. Cool stuff!

This expansion makes good on its promises on increased interaction and adds a lot of content without slowing the game too much, a very welcome addition to the family! Our favorite along with Cities.

The rules are available here.

Ppick this one up at these online retailers