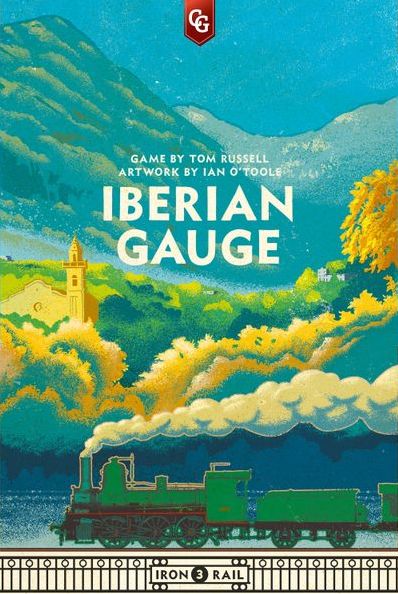 Iberian Gauge is considered the heaviest of the Iron Rails series by Capstone, but with that said, it's a very light game compared to the older games in the Train/Stock genré. It is also less cut-throat than its cousin, Irish Gauge. Playing time is about 90 minutes and it supports 3-5 train barons. Like the title would suggest, the game has been out of print by quite some time and if everything goes as planned it will hit the stores in June. The game features artwork by the great Ian O'Toole which brings a very sleek map to life in a great way. Here is the description from the publisher:

The morning stretches over the tops of the tall, rugged mountains that dominate the Iberian Peninsula. Hammers ring, iron on iron, fighting stubbornly for every inch of new track against the unforgiving and unyielding terrain. The age of the railroad is coming to Iberia, but it won’t be easy… In Iberian Gauge, you will invest in railroad companies during Stock Rounds. In the Operating Rounds, each share of stock allows the shareholder to build track for that company, in the order those shares were purchased. But building in such hostile terrain is expensive! Leasing track from other companies reduces cost and keeps your railroads expanding. Failure to expand will sink your stock values, leading to ruin!

If i were to dive into the economic train games genre for the first time, this would be a great place to start, but if you are looking for a quicker, and in the same time more cut-throat game, Irish Gauge is simply awesome.

Gamenerdz have a sweet preorder price on the Iberian Gauge reprint, just 28$ instead of the normal price, 40$.