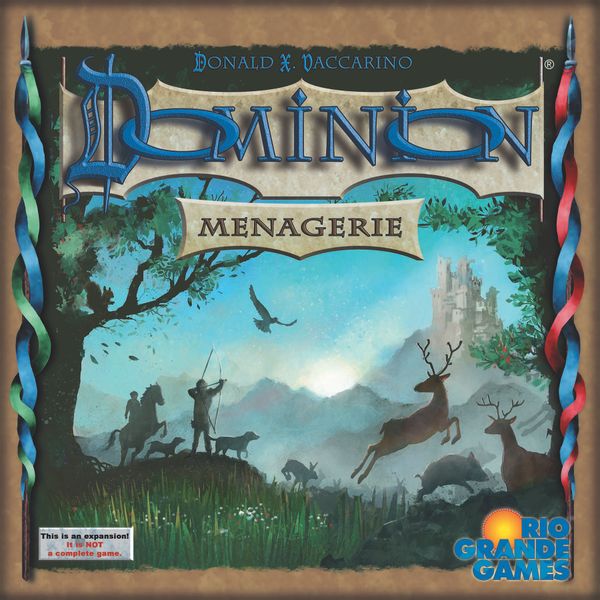 Note that this article assumes you are familiar with Dominion and previous expansions!

Dominion: Menagerie brings 400 new cards, divided like this; 30 different Kingdom cards, 40 landscape cards; Events and Ways. There will also be 30 Horse cards. The remaining 30 cards are randomizer cards for the Kingdom cards. It also comes with Exile playmats.

So let's get the Landscape cards out of the way first.
Events are returning from sets like Adventures and Empires, which essentially are 2-3 cards you will add each time you play and they have effects you can pay for to use during the Buy phase, how many times you would want.
Ways are new for this expansion and they are laid out much like events but instead of being used in the Buy phase, the effects on these cards can be used instead of the action card you just played.

Next up, Horses. These are not in the supply, they are special cards you can gain from playing other cards, and are usable 1 time and the returned to the pile. Kind of like Spoils from Dark Ages works, except this is an Action card.

Exile
There are some cards that allow you to "Exile" cards, which means, put them on your exile mat. Pretty much the same way Island works in Dominion: Seaside, but cards in Exile can also come back to your deck and discard pile in various ways. The cards in exile are included in scoring at the end.

Dominion: Menagerie will also feature Duration cards and Reaction cards, and all in all this looks like a pretty fun set. Take a look at the rulebook below, where you can have a look at most of the cards.

This expansion looks promising. Preorder it below.