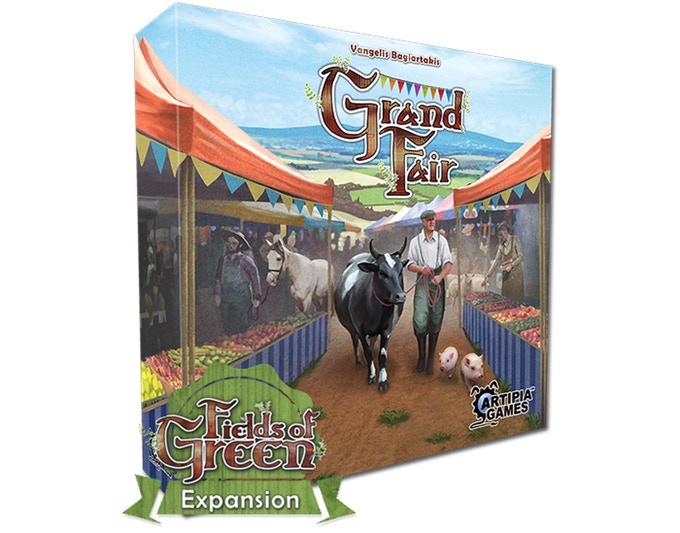 The next expansion for Artipia Games "Fields of Green" is to be released soon, out sometime in the spring 2019, probably February or March.

"Grand Fair introduces the Grand Fair Attractions, letting players interact with the fair in many ways.
It includes additional locations, objectives, components for a fifth player, and rules+material for solo play"

The Grand Fair Attractions are square mats that are drawn at the beginning of each game and placed on the table, next to the players.
Each of them depicts a happening at the Fair that interests the players. The players have tokens (wooden tractors) that use them to interact with the Attractions, but each Attraction utilizes them in a different way.
Some offer players a mini game that they play while advancing their Farms, others offer them more options when building locations and some even add new actions for the players. 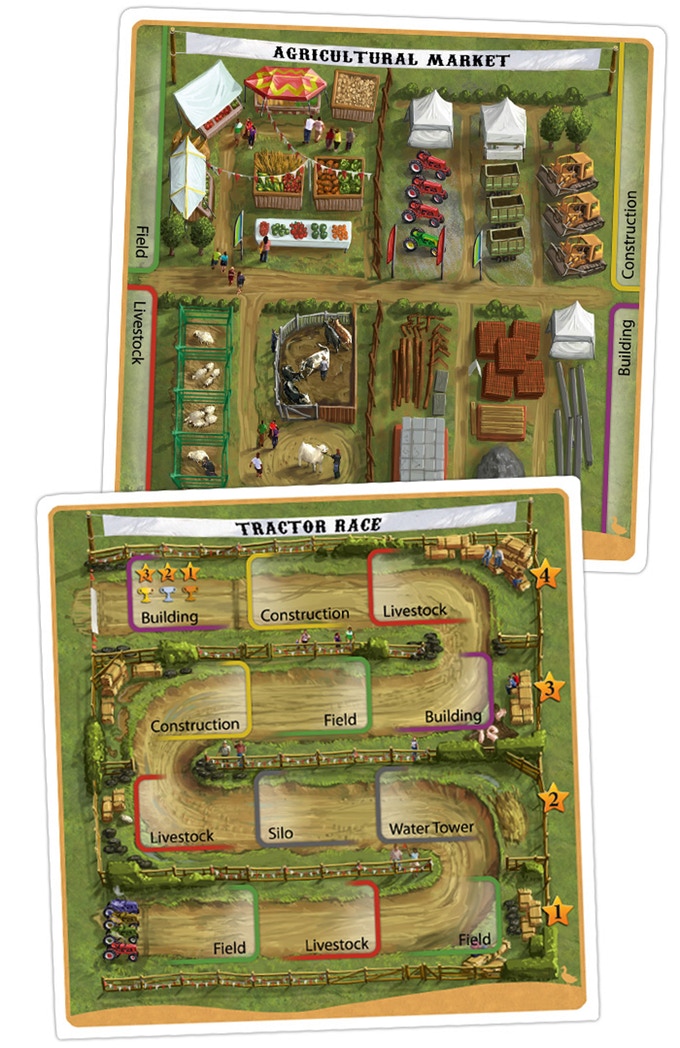 In Agricultural Market for example, you reveal a location of each type at the beginning of every round and you may swap a card in your hand with one in the Attraction, giving you more options on what to do.

In Tractor Race, whenever you build a location of a specific type, you move one space forward. Depending on your position at the end, you will be getting extra points at the end, with the player finishing first getting even more points!

The expansion will contain 8 different Attractions (with 3 used in each game) that will allow for many different and exciting combinations! 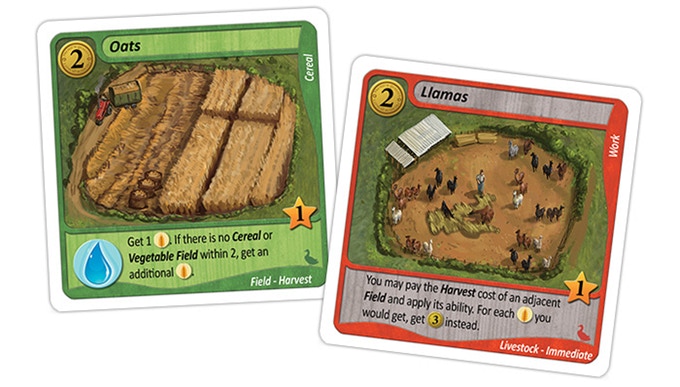 With 12 different locations, you will be getting many exciting new abilities, cool interactions and more strategies to discover!

The annual Grand Fair features many Competitions for the local farmers! Prove to your fellow farmers who grows the tastiest Vegetables, who raises the healthiest Livestock and who has the most efficient Buildings!

Competition cards are revealed at the beginning of the game and list a goal for the players like "Build the most Vegetable Fields" or "Have the most Equipment". At the end of the game, the player who best fulfills the goal, will gain additional points! With 12 Competitions included in Grand Fair, each game is going to be different and each decision you will be making is now going to be much more crucial!

The Grand Fair expansion allows Fields of Green to be played by a single player! You can now get to experience all that the game has to offer, even when the rest of your play group is not available!

Using the corresponding section in each Competition card, you set a series of specific goals for the game that you need to meet in order to win. Then, you draft cards in a specific way, unique to the solo game, and build your Farm as normal. After 4 rounds, you check to see if you met the goals you had and if you managed to reach a minimum score of points (based on the difficulty level).

Included in Grand Fair you will find additional cards, tokens and markers that will allow you to add a 5th player to your games!

About the Base Game

Fields of Green takes place in the middle of the 20th century. Players take the role of farm owners trying to expand their property and business. By adding fields, livestock and facilities they build an economic engine that will bring them closer to victory.

Fields of Green is played over 4 Rounds (years) during which players draft cards and add them to their ever expanding farms. At the end of each year comes the harvest season where they must water their fields, feed their livestock and pay maintenance costs, in order to receive valuable resources that will allow them to further expand in the next year.

Through various means, players eventually convert their wealth to Victory Points and the player who gathers the most by the end of the 4th year, is the winner.