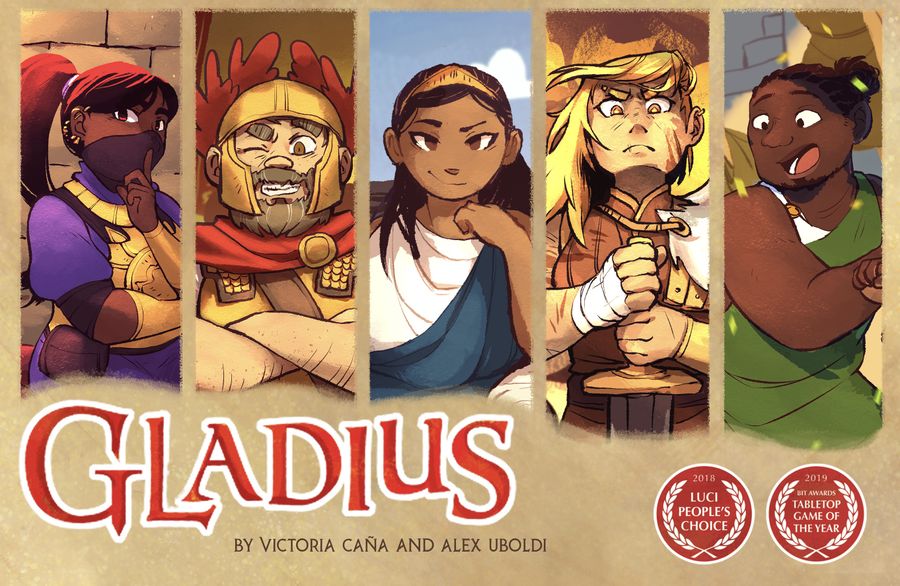 A very interesting looking game is currently on Kickstarter, Gladius. Gladius betting and bluffing kind of game, with a gladiator theme, kind of like the awesome classic Cheaty Mages.
This game takes things a bit further by adding more possibilites than CM, without adding a lot of unneeded complexity. Sounds good? Yes, it sure does.

A game of spectacle and sabotage from Cat Quartet Games! In Gladius, play as cunning Roman spectators trying to make the most money by betting on and rigging the gladiatorial games.

For two to five players, you take your pick of the five playable characters, who each have their own underhanded tactics to help them manipulate events in their favor.

Each round, players secretly place bets on competing gladiator teams, and then use influence cards to sway the outcome of each event in their favor. Players can bet on teams to win or to lose, so you're never sure what your opponent's intentions are.

A playthrough comes in at around 30 minutes, with whoever has the most money at the end of three rounds taking the victory.

A note from the publisher:

We both had a deep interest in history and tabletop games. We wanted to make a game that was fun, fast, and accessible to a broad audience. So we made a prototype, found an artist on Twitter (in true age of the Internet fashion!), and had my sister do the graphic design. We sought to create gameplay and a visual style distinct from the typical Roman board game. Gladius is a take on ancient Rome the world has never seen before!

The game is currently live on Kickstarter and has been successfully funded. The campaign will run until March 19th at $25 for the base pledge which includes all of the unlocked stretch goals. Check it out here: https://www.kickstarter.com/projects/catquartetgames/gladius