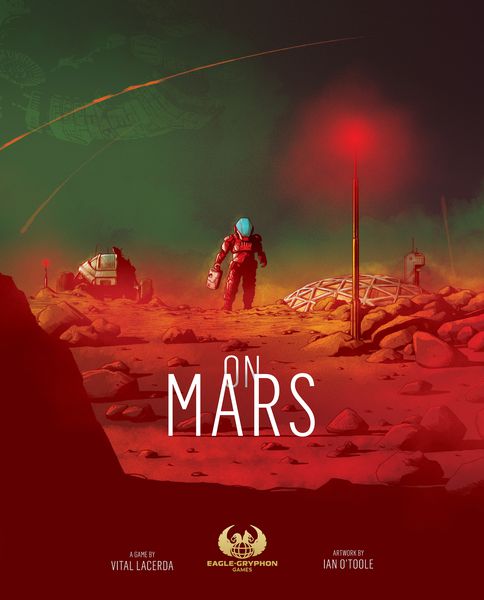 As the name suggests, the game is set on Mars, and the players take the roles as chief astronauts working for private space exploration companies. They are to develop the biggest, most advanced colony on mars scoring points for different mission goals and hidden corporate agendas.
Mining, building, exploring, upgrading buildings, recruiting and managing settlers are their tasks, as well as getting power to the colonies.
In the end, the colony should be self-sufficient.
The game will support 1-4 players, and will take 2-3 hours to play.

On Mars is played in turns using different phases:

Actions take to form of worker placement, cards, scientist tokens, and tech tiles. Examples of action might be building rovers, ships, or buildings. Sell and buy goods. Research new technologies, which your competitors might use, for a price. Buildings need resources like ore, energy, O₂, and people to run.

Food, O₂, and water also need to be stored.

As you might have gathered, building a successful colony On Mars is not easy, but it sure sounds like a lot of fun. The game WILL be on the heavy side, as in complex and advanced.

We are very excited about this release and we can't wait to try it out. Meanwhile, you might want to have a look at Vital Lacerdas other titles, like Vinhos or Lisboa.

The Kickstarter is ongoing. Check it out here.

Read our On Mars review.

Are you pumped for this one?