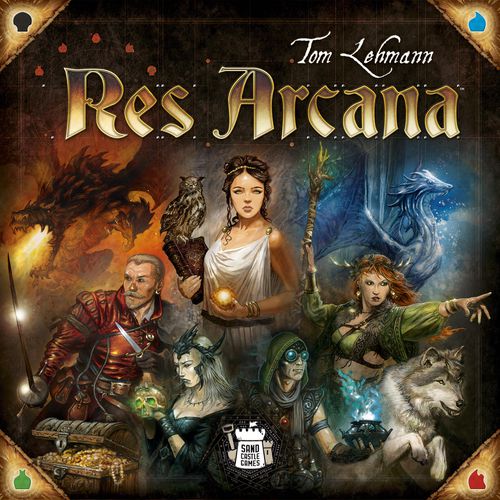 In the four corners of the world, the sky is covered with clouds, the oceans change color, the atmosphere crackles with magic. In the dim light of an alchemical laboratory, on the snowy summit of a sacred mountain, in the depths silent of a corrupt temple, powerful mages prepare for confrontation.

They harvest, handle, and consume the essences that make up the magic of the world to create mysterious artifacts. As they bring out strange creatures from the void, they conquer terrible places of power and invoke gigantic dragons to defeat their opponents!

At the start of a turn, everyone collects resources generated by their cards and optionally removes resources located on their cards, adding all of this material to a personal resource pool. Then, starting with the round's first player, each player takes one action in clockwise order until all players have passed and the round ends. The actions are:

• Use the power of one of your items in play.

• Place a card from your hand into play after paying its cost.

• Acquire a monument or place of power from the shared playing area after paying its cost.

• Discard a card from your hand for any two non-gold resources or one gold.

Once you pass, you're out for the round. You straighten all your cards, draw one card from your deck, swap your current magic item for one in the reserve pool, and (if you're the first one to pass) claim the first player marker, which adds 1 victory point (VP) to your score while you hold it.

So that's the overview of a round, but what you are actually doing? Racing for points, with the game ending the round that someone has at least 10 VPs, with whoever has the most VPs winning. Some of the cards in your deck will be worth VPs if you have them in play, but most of your points come from the monuments and places of power you acquire, with those latter cards often having a variable value depending on what you do with them.

This game has been released back in 2019, pick it up below. Should cost about 35 dollars.