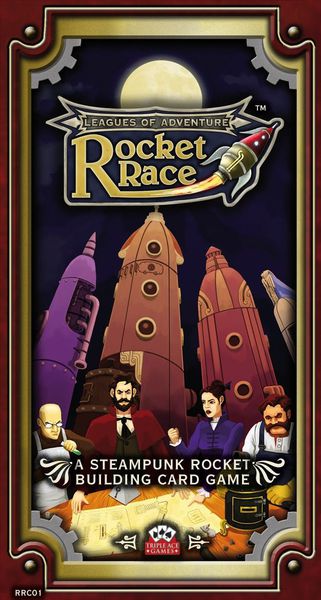 In Leagues of Adventure: Rocket Race, players are part of a league of gentlemen adventurers from the British Empire in 1898. They will be trying to construct and launch a Moon rocket before the other players. The player that can best assemble their league’s rocket will be declared the winner.

There are two different types of rules for this game, standard and advanced. The advanced plays 2-4 players while the standard plays 3-6. In this review, I will mainly be discussing the standard rules.

To begin the standard game, you will set aside the four league, four workshop, three workshop upgrades, and four turn sequence cards. These will not be used during this game. The remaining cards are shuffled together and then placed face down in the center of the play area. Players will take ten resource tokens and place them in front of themself. This is their resource pool. The first player is chosen and gameplay now begins.

The game consists of a lot of bidding. To start the game, the first player flips over the top card and bids on it using the tokens in their resource pool. The bidding then continues around the table with players either bidding higher or passing. Once a player passes they can not bid again on that particular card. If all players pass and no one bids on a card, it is discarded and a new card is drawn. The player that bids the highest bid wins the card and places it in front of them. They must then place the number of tokens that they bid on the card. This signifies that the card is in Development. All players are then able to remove a token from any cards in Development that have tokens on them. Those tokens are returned to the player’s resource pool. Once the last token on a card in Development is removed, it is complete and ready to be used. The same is done with any events that are in Development. Once this is completed, the bidding round is over. The player that won the card becomes the first player and flips over the next card of the deck, beginning a new round of bidding.

Players must have one capsule, one propulsion, and one steering component to make a rocket. They may also add up to three accessories of their choice. These accessories can help the players' chance of succeeding when trying to launch their rocket. A player can not launch a rocket until all of their components are no longer in Development.

To launch a rocket and thus win the game, a player has to announce that they are ready to launch at the end of a bidding round. The player must set aside the components that they plan to use so that the other players know which pieces are being used and to be able to add up the reliability scores to get a total. The player then rolls two dice and adds them together. If they roll equal to or lower, they have succeeded and are the winner. If they roll higher, they must take the pieces that they used and shuffle them together. The player to their left chooses one of the cards at random and discard it. That piece suffered a catastrophic failure and is destroyed. A roll of 12 is always a failure and a roll of 2 is always a success. If more than one player launches a rocket at the same time, the player that rolls lowest for a successful launch by rolling equal to or lower than their reliability rating wins.

The advanced games play a lot like the standard game except with a few variations. The main difference is that cards must be bought much like in a deck builder. There is no bidding. Players can either launch, perform scientific research to raise their level in a certain area of research or acquire events to sabotage their opponents. Components can then be added to form the rocket. Just like the standard game, the first player to successfully launch their rocket and land on the Moon wins.

This game looks nice. To start with it comes inside a sleeved wooden box. The cards all have a very steampunk feel to them and they look and feel really nice. They are a good thickness and shuffle really well. I really like the artwork. The card design isn’t bad either. All the information is easily distinguished so that you can find what you’re looking for rather easily on them. The dice are really nice as well. The counters are thin plastic and come with a sheet of stickers that must be placed on them. The stickers are little gears or cogs. I’m not usually a big fan of sticking stickers on stuff. I’d really have preferred the counters to be thick cardboard with the image printed on them or even some form of die-cut counter that looked like a gear. All in all, it isn’t bad but it could have been done a little better.

The rulebook is small and fits nicely inside the box. It’s completely done in black and white. Everything is laid out rather well with regards to both the standard and advanced rules. There’s a nice picture on how to set up the advanced game. The last few pages show examples of the different types of cards. Other than that, there really are no pictures to speak of. There is one example that explains a little about the scientific research but that’s it. The rules are easy to read and understand. As good as it is, I really would have preferred there to be more pictures and examples. I especially would have preferred color to the book. The saving grace for this is that it is set up so well.

The game is quite fun. I enjoy both the standard and advanced rules. The betting mechanic in the standard version is lots of fun. This version captures the feel of an actual race. It’s neat to only be needing one more piece to send your rocket into space just to lose it in a bidding war. It’s frustrating and fun at the same time. I really enjoy the interaction between players. The other version feels a bit more like a deck builder to me. Granted, you’re not building your deck but buying events to sabotage your opponents and buying pieces to add to your ship through research. It’s really fun as a 2 player game much like some of my favorite deck builders. Both versions are fun and I think most players will be able to find at least one version of the game that they will like.

Leagues of Adventure: Rocket Race is a light card game of rocket building fun. The game at it’s longest playtime is around 30 minutes. That’s for the advanced version. The standard is a little bit less. It’s fairly simple to learn and play. It’s one that almost any player will be able to find a version that they enjoy. I feel that deck-building fans, as well as bidding game players, will enjoy this. The artwork is really nice on the cards and has a definite steampunk feel to them. I wish that the counters had been designed better and that the rules had more content and were in color. The game lives up to it’s name as it definitely feels like a race. Even with the few problems, the gameplay is solid. I really enjoyed playing it. I recommend that you give it a try. You might just enjoy it as much as we did.

This review of Leagues of Adventure: Rocket Race was written by guest-star Jonathan Nelson. The original review can be found here. Also, check out his site GAMING BITS.

This game is from 2014, but still avaible at these sellers