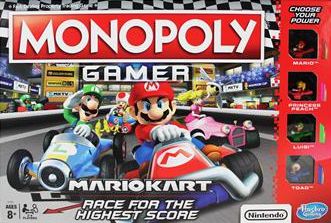 Another Monopoly edition, another Monopoly: Gamer edition. Any good? Well, let's go over the rules and the content and see what's what. There's a chance this might actually be a good Mario board game! Also, there's a couple of extra characters available if you want more variety and be able to play more than 4 players. Keep an eye open at the end of this article.

The object of Mario Kart Monopoly

Race around the standard Monopoly-like track to collect money, buy properties, and win races. All these actions will get you points, the player with most points when the race card pile is depleted is the winner.

The gameplay is very straight-forward;

Blue shell: Choose a player to drop 3 coins on his/her current space. When playing Peach, you may choose TWO other players do drop 3 coins.

Green shell: The player on the space closest, and in front of you to you drops 3 coin. If two players are in the same space, you choose who to hit.

Flash: Every other player drops 1 coin at their current space. If you have Toad, each player also has to give you one of their coins.

3 coins: Get 3 coins from the bank. If you're Mario, you can choose to add 3 to your movement die roll instead.

Banana: Drop a banana token on your current space. The next player who passes this space must stop and resolve that space's action. If you are playing Luigi, you can put a banana on any of the property spaces you own.

There is a summary later on all the characters special abilities, plus the abilities of the expansion characters

When you land here, drop 2 coins on the space.

When you land here, roll the numbered die, and collect that many Coins from the Bank.

Roll your movement die again, and move that many spaces.

Properties are set up on the board from least expensive to most expensive. When you land on a property and it is unowned, you may buy it for the price printed on the space, if you buy it, take the deed card. This deed card will earn you money when someone else lands on the card, and it's also worth points at the end of the game.

Don't want to buy it or can't afford it?

The property goes up for auction. Bidding starts with you and moves to the left. Bids start at 1 Coin and may be raised by as little as 1 Coin.
The highest bidder wins the auction, and payment goes to the Bank. If all players pass on bidding, the property remains unowned.

When you land on a property that someone else owns, pay them the rent shown on the property's Title Deed card.

If a player owns both properties in a color set, pay them double rent. If the owner doesn't ask you to pay rent before the next player rolls the dice, you don't have to pay, so pay attention! :)

At any time on your turn, you may offer to buy, sell, or trade Property with other players. You may not sell nor trade Race cards at any time. The points you earn from winning a race are yours until the end of the game!

You may pick up any coins dropped here, apart from that this space does nothing.

Move your Character Token to the In Jail space immediately! Do not collect 2 Coins for passing GO, and do not collect any Coins you pass or land on. Do not initiate a race. Your turn is over.

You may not take part in Races while In Jail.

You may still collect rent, take part in auctions, and trade. Character Abilities still affect you. If you ever need to drop Coins while In Jail, drop them on the Just Visiting space.

How do I get out of Jail?

When you leave Jail, you may pick up any Coins on Just Visiting.

When you pass or land on GO, you will collect 2 coins from the bank, and also a RACE will happen. You will draw the top card of the race, and everyone who wants to participate in the race must pay its cost. The winner gets the card (worth the points printed on it), and also gets to resolve the action printed on the card for the winner. Some cards also have effects happening the players ending up on 2:nd and 3:rd place.
When the last race is finished, the game ends!

When the game has ended, players add up their points from their Properties, Races, and Coins. Every 5 coins if worth 10 points. So for example, if you have 23 coins, they are worth 40 points.
If there is a tie, the player with the most amount of property and racecards win!

Spoiler alert here guys.. :) Some of these are hard to come by, but the random packs are easy to come by and affordable.

Or, you could pick up a pack of all the characters above, just make sure it's not overpriced when you buy it..Get it here.

An OK game for kids and families. Great if you also like Mario Kart. Actual gamers; stay away from this one, it's too random. 6/10. That said, this might be the best Mario board game out there, and one of the best Monopoly Gamer versions.

Do you have any questions about the rules or about the game in general? Ask em' below! By the way, you should also check out our Monopoly Fortnite review.

In case you haven't got this one, pick it up here: