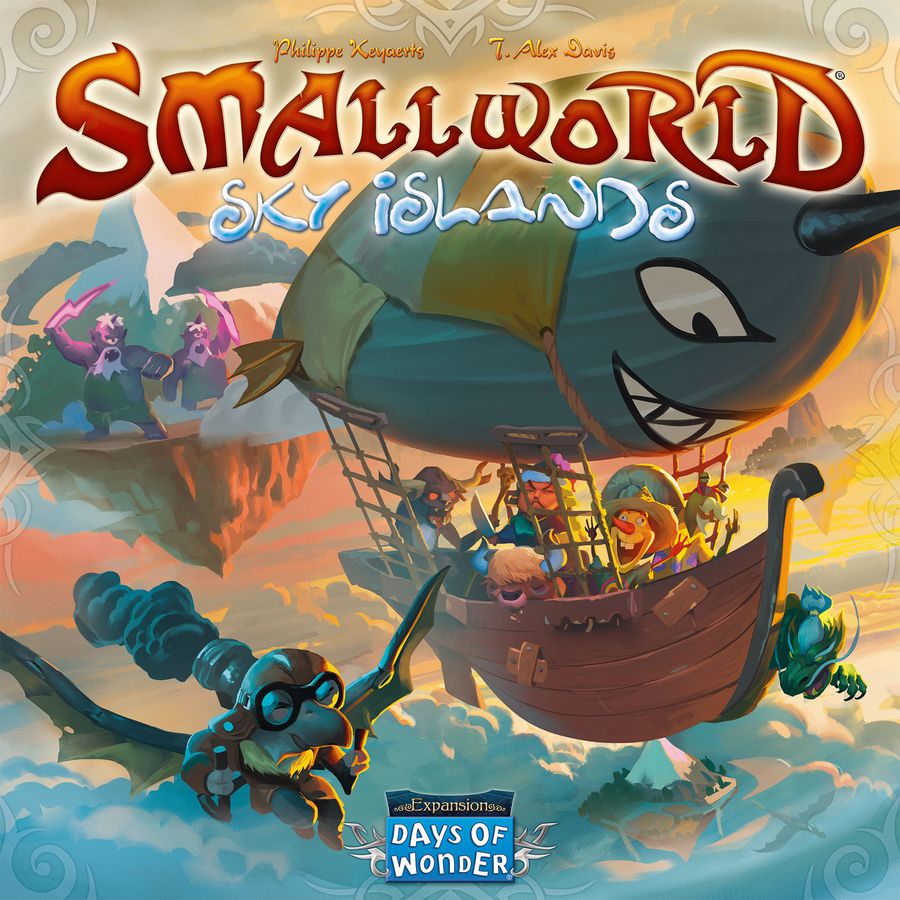 Note that this review asumes you're familiar with the Small World base game.

As you can see, this expansion comes with a new board (Sky Islands) and 7 new races.

As the Sky Islands adds more areas to conquer, you will have to use a board that accomodates 1 player less than the number of players. For example  in a 4-player game, you will use the 3-player board from the base game and the a Sky Island board. The Sky Island board is double sided, one with 3 islands and one with 2, and you are free to choose which one you want to play.
The Sky Islands are accessed from the base board by the Beanstalk or the Stairway, the location of these are randomized, but it's recomended that you keep them apart, and keep them away from the border zones.

Also, In 4- and 5-player games, put the “END” token on the last spot of the Game Turn track to remind you that the game lasts one turn less due to the change of board. In 3- and 6-player games, you play to the end of the turn track for that board.
That's it. You're ready to play.

The Sky Island zones work just like normal zones, but you cannot access the sky island in other means than through the Beanstalk or the Stairway (unless you can fly..). You also cannot start there unless you have a special power that says so. If you hold all the zones in on Sky Island at the end of your turn, you will get one extra coin. So there's the incentive to go there in the firt place.

That's pretty much it when it comes to rules and game play. The small world: Sky Islands rulebook can be found here.

This expansion is probably the best one up to date. 7 new races and 7 new special powers, most of them interesting. The Sky Islands and their accesspoints will be fiercely competed for, which is what this game is all about. But in the same time, another player might focus to dominate the base board instead.... Again, probably the best small world expansion.

Get this expansion from one of these online retailers. Should cost you around 25 bucks